Having been created with passion by Cajuns from both sides of the Atchafalaya Basin, paintings and mixed media works in Du Bassin Sauvage (From the Wild Basin) feature figures and creatures that exist in symbolic narratives of emotionally charged experiences that remain beautifully authentic. Themes of reclamation and culture from south Louisiana run concurrently through this two-person exhibit of Louisiana artists Gabrielle Savoy and Jonathan “feral opossum” Mayers.

The work will be exhibited at Cité des Arts in Lafayette, LA from April 6th - 30th, 2015. Our reception will be held on April 11th from 6PM - 9PM during the monthly Downtown Lafayette Artwalk. If you plan on enjoying Festival International, you're welcome to stop by Cité des Arts to view our exhibit!

Gabrielle Savoy was born out in the middle of nowhere in a peaceful little paradise her parents created in Savoy, Louisiana. Born into a family of renowned Cajun musicians, she was raised in an environment that held strong beliefs when it came to culture, tradition, and the preservation of the beauty and importance of those things through music and art. Her work is immensely autobiographical, portraying surreal and often childlike images meant to symbolize pieces of powerful experiences she has had. She is deeply inspired by music, dreams, and the landscapes and people of southwest Louisiana- weird, wild, passionate, and deeply rooted in their compelling culture. In fact, Gabrielle often feels a bit like Louisiana herself, on the outside of the crowd in her own little wild world, full of extremes and never missing an opportunity to partake in the intoxicating moments of life. She made her home in Paris for a while, but her heart pushed her back to the soulful spirit of the south. Due to her relationship, she plans to move back to the city of light in the near future, but no matter how many miles separate her from Louisiana, this place will always be her home. She feels like she was born into a world of magically talented and passionate people and considers her family members to be some of her greatest inspirations, not to mention her best friends. She spends most of her time photographing local bands and people, as well as working on her own personal art projects alone and with friends.

Jonathan “feral opossum” Mayers was born in the area where the Houma and Bayougoula tribes once divided their hunting grounds by le batôn rouge (the red stick). He grew up under the white oaks close to the Amite River, a place that welcomed discovery and exploration. On weekends Mayers would take trips to the family camp on Belle River in Pierre Part, LA or to visit family in Lafayette, Sunset and Opelousas, LA. He formed a connection with his environment by plunging into lakes to catch turtles, creating mud structures, building wooden bridges, and imagining himself as a monster to then smash “skyscrapers” in mudbug cities. While attending LSU, his artwork took on cartoon-like imagery, boasting vivid colors reminiscent of video games and comic books. His passion for reconnecting with his heritage and reclaiming his family’s culture, which was lost two generations earlier due to the Americanization of Louisiana, took hold and helped to spawn “Green Guedry,” a character which uses one of Mayers’ ancestral surnames. The character acts as a metaphor for benevolent, yet resilient, Cajuns. After living and working in New Orleans for 6 years and feeling seemingly disconnected from the land, Mayers turned to creating images of mythological monsters that now exist in his home-inspired marshes and swamps. He spends much of his time visiting with artist and musician friends in Louisiana, listening to local bands from the area, steadily learning language and traditions of his culture, and travelling to environmentally sensitive areas to collect mud and sediment from these places to include in his artwork. 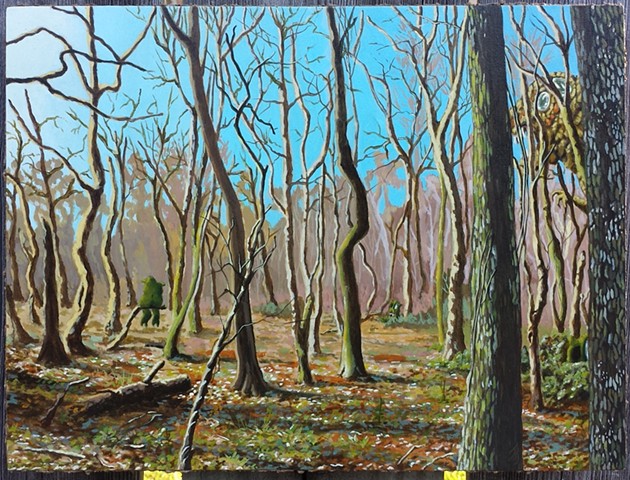 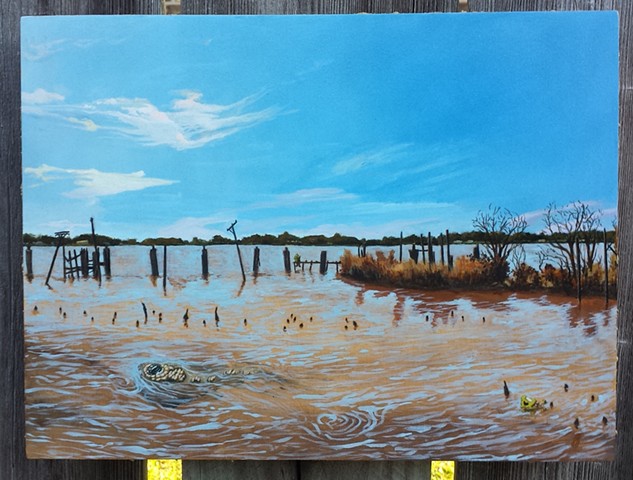 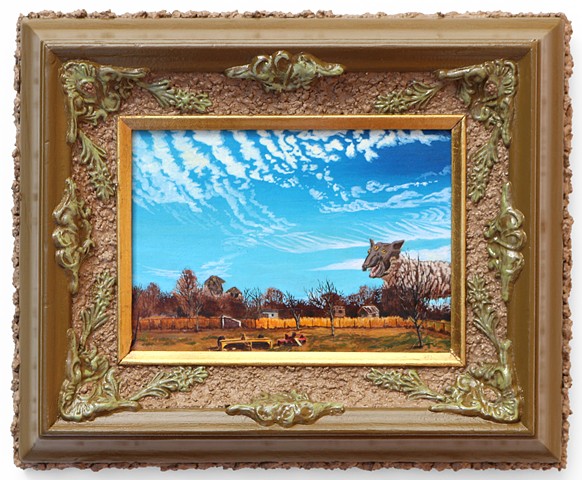 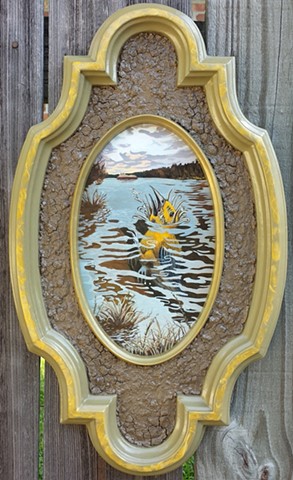 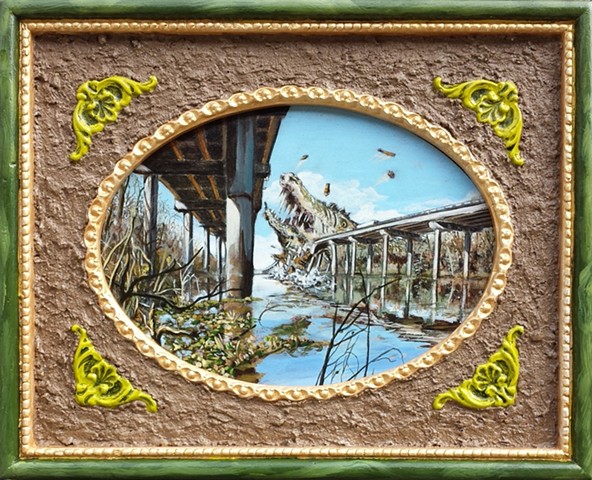 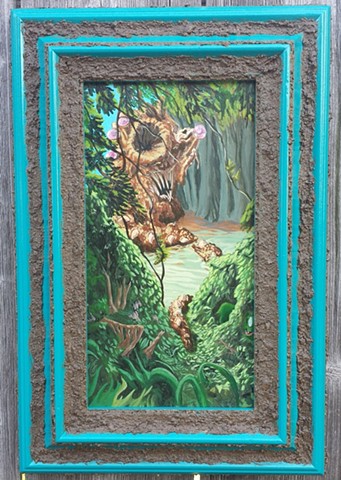