While hanging out between printmaking classes at Louisiana State University with an artist friend of mine, Matt Bourgeois, we jokingly juggled the idea of creating aliases for ourselves, much like many artists and musicians had done. It was 2007 and many of the Pop-surrealist artists, like Greg "Craola" Simkins and MARS-1, were getting more press in Juxtapoz magazine. Matt said his choice was "neglected sheep", while I declared mine would be "feral opossum".

I know that most opossums are certainly feral by nature, though I hear they're more like cats when they are domesticated.

Anyway, we would have an artists' on-line network and create a larger community of like-minded creatives, though that isn't exactly what happened - Which is ok, because it's still just as fun to for me to respond to "feral" or "opossum" when I'm being addressed after all these years.

Under my alias, feral opossum, I was able to freely create cartoonish narratives without the weight of being so serious as an artist. In many of these earlier works, I had included my own imagined creature, the Green Guédry, which becomes a metaphor of silly benevolent southern Louisianians. Guédry is a prominent Acadian surname in my ancestral tree, so that's my personal connection to the name. Then, I referenced elements of popular culture by including objects and themes relating to monster movies, video games and fantastical imagery found in tabletop card games like Magic: The Gathering, which were all personal interests of mine. Sexual imagery, meant to represent rebirth and the lifecycle, revealed itself within my work as absurd additions to the environment or the characters themselves. My main artistic influences during that particular time were Conceptual Realist, Robert Williams; Pop Surrealists, Jeff Soto, Mark Ryden, and Alex Pardee; Surrealists, Max Ernst and Rene Magritte; and Baroque painter, Caravaggio. 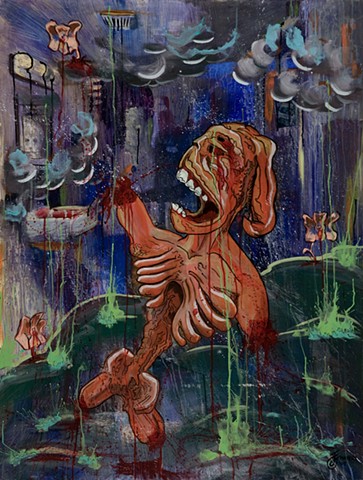